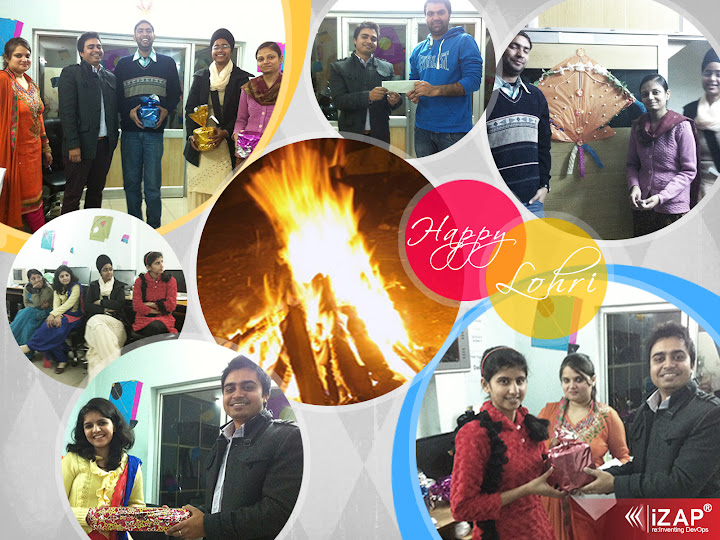 WOW, We got one more day off!! And it was justified enough as it was Lohri!!! We, at iZAP have always tried to create an aura that is homely as well as encouraging. Be it the upbeat festivals or smashing parties, there is one thing very evident in all our affairs i.e immense dedication & team work.

Coming back to what we did on Lohri, like always we all dressed up in our best ethnic apparels (despite the chilly winds!!). The office was well decorated with cute little kites and colorful streamers. After working for almost half day, it was the time for the gala. The gala began with the Lohri Quiz, so as to test out that who is deeply attached to our Punjabi culture and knows the real importance of Lohri ! Monika really did well in quiz and scored the highest marks too. Then, celebration moved to a kite decoration competition with 5 tremendous teams. Each team was provided with colorful materials, a kite and the time duration of 30 minutes. As the time zapped, we all proudly hanged our respective kites on the wall of fame (it’s just a self proclaimed name!!). Even though each of the kite showed immense creativity, there had to be just 1 winner. And the winner was … Team B – Chetan Sharma, Ramandeep Kaur and Priya Gupta.

Now, it was the time to announce the winners for the titles of Best Muteyar. Well, our organizers wanted the results to be fair enough, so they asked us all to vote for our personal choices. And gratefully, we got fair results, Narinder Kaur, was awarded for the Best Muteyar. Mr. Amit was rewarded as Best overall performer. Shilpi was rewarded with Star of the Month.

Last but not the least; it was the time for Promotion Letters. Yipieee….Every iZAPPER got increment and was the happiest and most exciting moment for all. That moment made our day! Now, it was time for some bonfire. We all headed to the terrace for the same. While few of us started flying kites, there were others cheering for them and giggling. As the bonfire was set, we circled around it’s warmth and sang lohri geets like sunder mundariye hoye !!! and had snacks too.

At the fall of evening, we concluded the whole gala with cheerful smiles and wishes. This was all how we managed to add a few more moments to the beautiful canvas of life, all thanks to iZAP – a place where we have learned to fall, stand and grow.